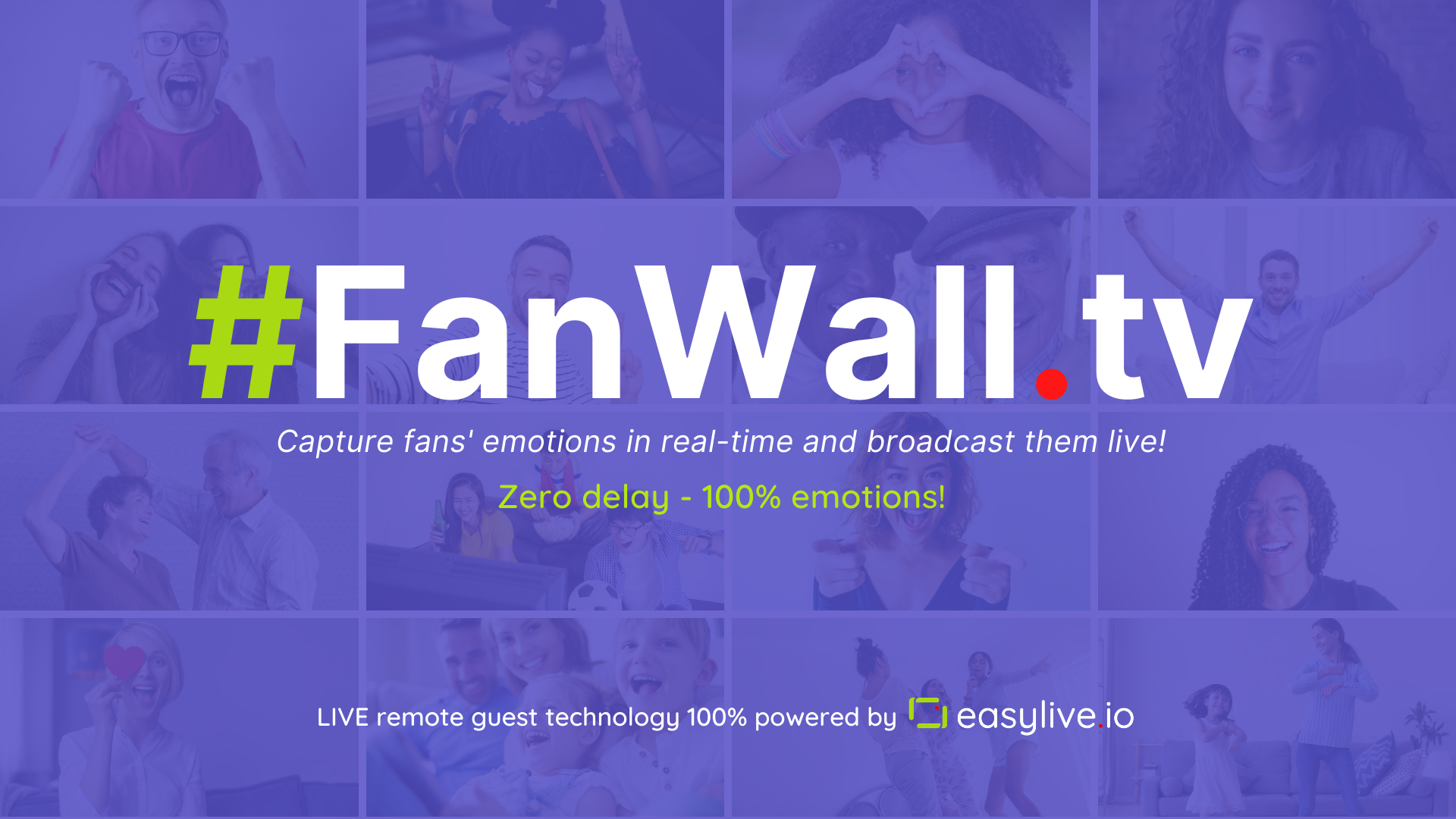 At the beginning of June, easylive.io rolled out its new & unique #FanWall solution for the Premier League, England's famous soccer championship! The goal was clear: to help fans out by giving them a way to participate in matches remotely and react in real time. With the FanWall, easylive.io found the best way to provide the players with a “supporter atmosphere” and to let fans continue to be part of the show without any risks.

Today, much more than a simple feature, the #FanWall has become #FanWall.tv, a fully-fledged service powered by easylive.io technology.

The COVID-19 pandemic has disrupted the whole world industries and particularly the sports world by forcing leagues to postpone matches or host them behind closed doors. It was incredibly frustrating for the players, and also for their fans, who were separated from their favorite teams.

In this context, using its proprietary technology, the 100% Made in France start-up easylive.io has stepped in and runned a brand new live remote guest technology named #FanWall. When the launch of this innovative solution was announced, the fans' response was overwhelming. They could finally be a part of the show again.

Innovation: at the heart of easylive.io's DNA.

The company’s proven ability to be technologically innovative also ensures its future. To that end, easylive.io invests heavily in R&D (research and development) to discover cutting-edge new services.

One result of such inventiveness is the #FanWall. For this, easylive.io has used and adapted its live technology to enhance one of broadcast media’s most coveted assets: the ability to capture with the lowest latency (150ms) the authentic buzz and emotions of an audience inside a venue and at home spontaneously on the screen.

Today, much more than a simple feature, the #FanWall has become #FanWall.tv, a fully-fledged service powered by easylive.io technology.

To be deployed during the League’s Covid-stricken season as the quarantine bans audiences from stadiums, the #FanWall aims to use streamed video via huge screens installed at the venues to replicate the same passion you get from live spectators.
Selected fans received a custom URL to watch the live game on the smartphones, laptops or tablets and easylive.io’s tech retrieved their camera feed to capture their reactions, create a gallery from them and transmit the results to each club to display on their stadium screens and to any TV network taking the feed – all in a matter of milliseconds.
“We capture the fans’ reaction in real time when a goal is scored. And the streaming or TV broadcaster can switch to their response immediately. That is where easylive.io makes a difference. Making that direct connection between the stadium and the fan. The #FanWall technology is the best way to provide the players with a “supporter atmosphere” and to let fans continue to be part of the show without any risks. Even at the end of the health crisis, with our solution you will be able to continue to engage your fans around the world. With the #FanWall technology, no one is left behind. Indeed, with this service we provide a new supporters experience and a new digital offer for sport clubs. It's a breakthrough that has never been done by anyone else.”  - Philippe LAURENT easylive.io CEO
The start-up also worked jointly with Haivision, one of its key partners to reduce latency as much as possible.
“The #FanWall technology works with all types of encoders but by coupling our technology with Haivision products, the results have been even more amazing in terms of interactivity (Only 150ms)” says LAURENT.

A new "digital fans” is born!

Easylive.io’s ongoing ambition, during and post-Covid, is to improve the service on offer to its customers, who need to keep sport and other entertainment fans happy if they are to stay in business as well.

“We’ve seen a lot of traction from that connection between the content producer, the broadcaster and the audience (during Covid); we want to continue heading in that direction” – Philippe LAURENT - easylive.io CEO

Even at the end of the health crisis, the #Fanwall technology could continue to engage fans around the world and to give them the opportunity to participate and support their team, no matter where they come from, no matter the borders situation. Clubs could go even further by offering virtual seats in the #FanWall via a special offer on your website.

It's definitely a brand-new way to cheer on its favorite team which is born... and with it a supporter 2.0!

Learn more about the #FanWall technology and discover The difference between a dedicated FanWall solution for broadcasters and a hacked conferencing service.

In the same category