The Los Angeles RAMS production teams were looking for a complete, flexible, and most importantly, dematerialized live streaming production tool to embark on creating multiple live formats that could be multicast across multiple of their social networks (press conferences, player interviews…). One of their key needs was also to be able to manage their stream easily and in a team from the cloud with a rendering as professional as a local control room. It was also very important for them to be able to customize their live stream with graphical elements like overlays, titles, or logos to highlight information but also partners (monetization).

The Los Angeles Rams have created many live formats and it is with the easylive.io studio that they now produce all their live content. From the cloud they can offer original and exclusive content to their audience. This is notably the case for their press conferences.
Focus on the workflow used by Los Angelas RAMS for press conferences:
- Streamed to social platforms using easylive.io virtual control room and RTMP stream.
- Multicasting of the live stream to YouTube, Facebook, Twitter, the website at the same time and push to the mobile app to view the YouTube stream.
- Slates and overlays are used to help transition between press conferences of multiple players or coaches. (Custom graphics)
- Audio and video are ingested using a LIVE U remote unit that uses a URL and stream ID to connect.
- Ability to add sponsorship and co-branding elements with potential clients/advertisers through the addition of partner logos or VOD promotional clips that can be played live. 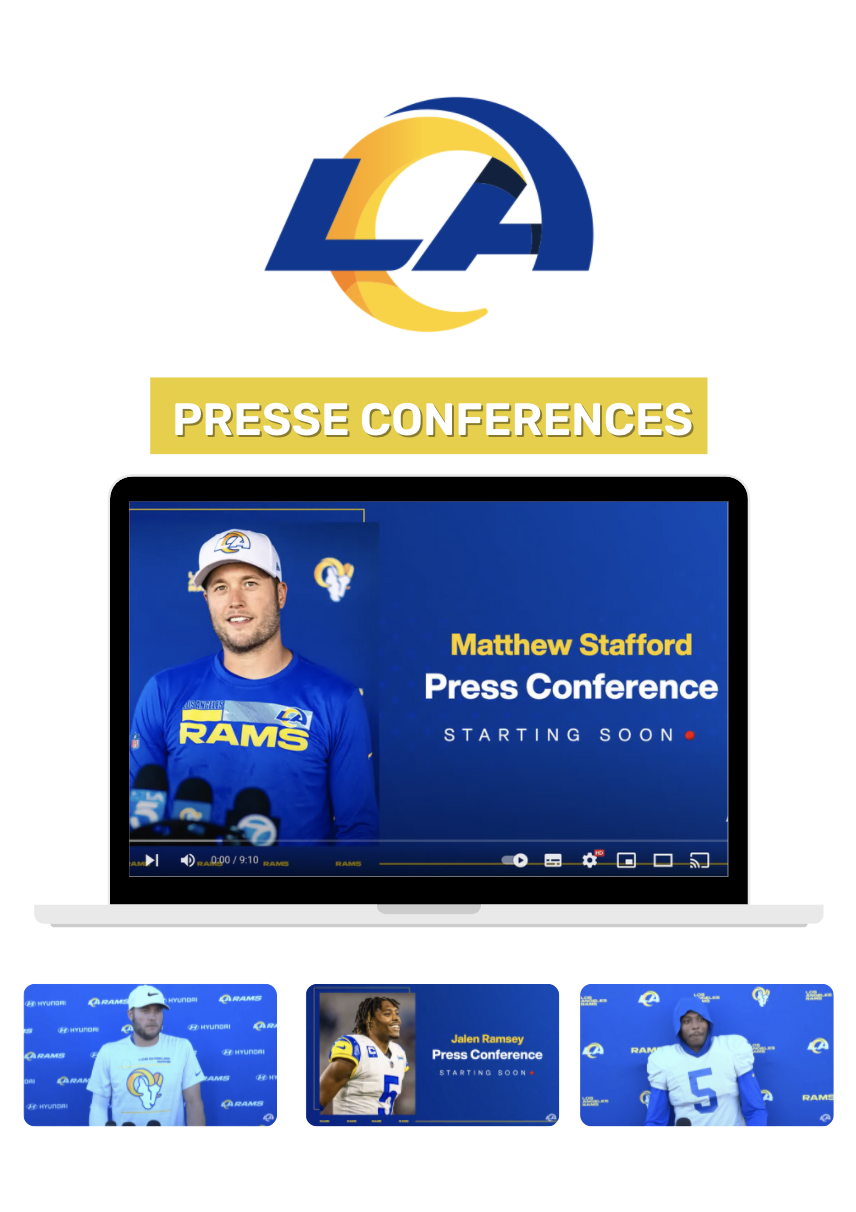 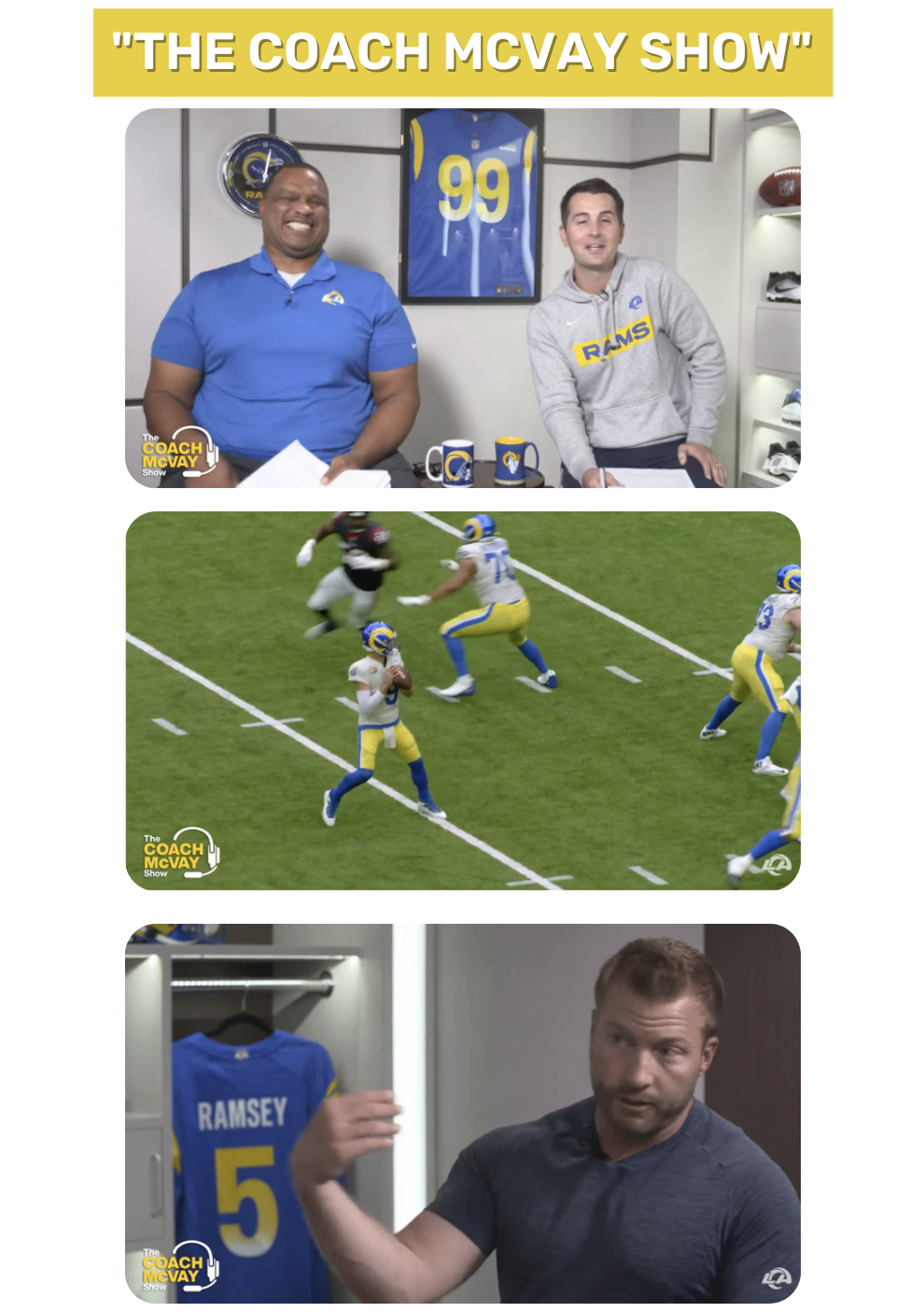 The Los Angeles Rams have also launched a new live format during which the coach of the club gives his impressions on the upcoming games, his feedback on past games, the strategies to adopt but also the key moments of the season. A total immersion in the locker room of the club for fans who can enjoy the analysis of the coach live! Realized as an interview, it is also available as a podcast on the Los Angeles RAMS website!
Focus on the workflow used by Los Angelas RAMS for "The Coach McVay Show":
As for the press conferences, the production team streamed the show on multiple social platforms at once using the virtual control room and retrieving the RTMP stream via easylive.io. They also added the show's logo and an opening visual to customize their stream and protect their content from spoofing. But they also:
- Used Multiple LIVE U units in conjunction with multiple cameras to create the feel of a more traditional broadcast while also switching to B roll footage using the included playlist feature in easylive.io.
- Retrieved Audio from multiple mics is split into a single input on one camera to ensure stereo audio which is then fed into one of the LIVE U units for ingest into the easylive.io Control Room.
- Achieved the Video sync with audio for the 2nd LIVE U unit via the included feature in easylive.io of being able to delay video by 100ms at a time or by creating a custom delay length to perfectly match audio from one LIVE U unit to the video of another unit. (This can be done during a live broadcast in case of desync issues).

"Between the Horns" – Lives tream (repurposed for audio podcast)

"Between the Horns" is a weekly show and also a poadcast about the Los Angeles Rams. During this live stream broadcast on Youtube but also Facebook, Twitter, RAMS website, and push to mobile app, the Horns' experts talk about the challenges of the season and give their predictions and opinions on the upcoming games. The difference here is in the construction of the show which is much more digitalized with remote guests joining the live stream from remote locations.
To create this digital show they:
- Used slates to signify start and end of live broadcasts; presents sponsorship opportunities for potential clients/advertisers to attach their brand to the Los Angeles Rams.
- Added up to (4) remote capture live sources to ingest a video/audio source off an internet connected device that has webcam and microphone functionality.
- Included functionality of a playlist to play B roll footage.
- Used multiple overlays to switch between multiple views of a single remote user to as many as 4 remote users at any given time.
- Any ingested creative can be animated using the included functionality of easylive.io (example for Between the Horns are animated Title Cards on single shots of remote guests).